For now, I'm waiting on a little more play money to have so I can do this. My phone's starting to frustrate me to the point of wanting to chuck it out a window because it's so slow; I'll most likely be getting a Nexus One come Thursday.
The project moves on!
at 10:47 PM No comments:

Well since I'm back to more work at work, there's mainly just time at home now devoted to working on the RepRap. I've been looking for sources for the electronics.. I know that shouldn't be my top priority, but I've still been looking.

Got the extruder nozzle in today, took a couple pictures of it since there weren't any good ones at the time. Since MakerBot has stopped carrying the v2.3 of the stepper motor controllers in favor of most likely moving to the v3.0 soon, I might be looking for an alternative stepper controller if I'm not able to procure some from the one lead I mentioned earlier.

The controller that's been mentioned and that I'm looking at is this one: A4983 Stepper Motor Driver Carrier with Voltage Regulators
It's been proven to work by some of the big names on the forums, so I think I could get it to work as well.

The next bit I'm going to start working on is the hardware bits and pieces. I need to locate somewhere like Fastenal that has a lot of the nuts/bolts/screws/washers/etc that I'm going to need for this thing. Getting all of those will help position me better for when the other goods come.

I've also been looking at some software casually, and while I haven't played with any of it yet, the stuff that's in use looks pretty darn interesting. I'm also looking into perhaps designing my own extruder.. I've got this idea for a gear reduction without using worm drive, so potentially less play in the gearing. My main thing is how to grip the plastic reliably, but i've been thinking up some ideas there as well. The whole extruder also needs to have parts bought for it, like the nichrome wire and motors I'm going to use.

Well so far I've started getting some parts orders going. I've been working on my spreadsheet for parts and been talking with a couple people from the forums..

So far I've listed all the parts needed for the frame and such that are RP-created.. Some of these I might be able to make myself, but others I'll have to source from someone with a RepRap. I do imagine this to be a bit slow, though I've already got a nozzle and set of vertexes on the way, and I may even have a set of stepper motors and stepper controllers coming soon as well!

I'll continue on with my spreadsheet and keep updating it with locations and people who I'm getting parts from, as well as post here with some notes on why I'm doing certain things.
at 7:54 PM No comments:

The RepRap is an additive Rapid Prototyping machine built from simple parts and electronics, and is designed to be (mostly) self-replicating in that it will be able to create many of the parts required to build a copy of itself.

Here is a photo of one (this is not mine, it's copied from the RepRap Wiki) 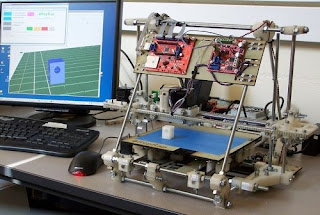 The basic philosophy of RepRap is that it will be something that's easy to build, can be created with parts that are relatively easy to acquire, and can be had for much less than commercial solutions, which usually start out around $15,000.

So to begin, I will be making the Mendel version, which is the second (real) version of the unit. Darwin was the first, and used a cube-like structure, while the newer Mendel version uses a triangular prism shape. It also trades four lead screws to control the bed for two, making things simpler and giving the motors less to drive. Power consumption is a large factor in design decisions, as it seems most people are trying to keep the current draw low. This may be to enhance portable possibilities, such as running it off of a battery or solar panel. It would be pretty neat to be able to just set a panel facing the sun and hit a button, and let the unit start to work on a part, if the power drops too low it will pause and wait until it has enough to continue.. and eventually you'll get a fabricated piece! Perhaps that'll be my contribution, who knows!

Either way, I need to start getting the parts together. The RepRap Parts Lister seems to be somewhat out of date, so I will be using a Google Spreadsheet to list all my parts, locations, costs, and amounts, which should help anyone building a Mendel with finding the right items while being sure they'll work with the new version. It will also allow me to share it in realtime, which should help keep things up to date on this blog.

I will most likely post this up somewhere on the RepRap forums so that people there can help see how wrong I'm doing things and hopefully steer me towards the right direction, but for now, I'm on my own.
at 11:47 AM No comments:

Well this Blog was started as a bit of an attempt to publicize my life a little more as a lot of people do, but I've decided to make use of it here.

My project is to build a RepRap machine, and thoroughly document every step of the process, from finding parts to purchasing them, assembly, tweaking, software, every last bit that I can.

I have a D700 SLR camera and a good background in electronics and have played with Arduino and BASIC Stamp microcontrollers. I've assisted a friend in building a CNC table which (while not completed yet) has given me some insights into how some of these things work.

I'm hoping to get some knowledge out of this, mainly about stepper motors and how they're driven and such.

I've had problems finishing projects before as I tend to get bored with them, but this is something that I'm committing to. I *will* have a working RepRap version II when I'm done, and I will not stop until it's working.

The RepRap Wiki is disorganized and out of date, and information for the two different versions of the machine is intermixed and difficult to tell apart. Further, parts sources are hard to come by on it and the forum isn't the most intuitive. I hope to resolve some of this as I've got some Wiki experience as well, and I hope to help bring the Wiki into a better semblance of order and provide much-needed information to newcomers who are wanting to get into this.

So, without further ado, all further posts will be documenting my foray into the world of home-built rapid prototyping!
at 9:37 AM No comments: