Was up at FamiLAB last night working on the MakerBot. Got pretty much everything working right, defined some temperature sensor stuff and configured the extruder controller's firmware and uploaded it.
Did some simple tests with temperature and the HeatCore, found it's working well! The temps with the thermocouple are rock solid, and the PID on the extruder does a great job. I decided to run some test extrusions just to squirt out some filament, and they're great! Coming out nice and smoothly, if a bit slow. Temps seem good, it's not burning the filament, and I went through a few start and stop, heat/cool cycles to make sure we weren't having any issues with the nozzle. Everything looks good so far!

I decided to push my luck really hard and get it to try a simple build, but the X axis just kept driving itself into the wall, and the RepRap host software seems to be buggy at best when it comes to working with Gcode files.. I need to play around with it more and figure out what it's trying to do.

I've taken the stock MakerBot electronics and used them as-is, no mods to the boards or anything. All I've done is take an extra Stepper Motor Controller from my Mendel electronics kit and hook it's step/direction up to the I2C connector on the motherboard with a 3 pin header. All that's needed for the stepper controller to operate is step, direction, enable, and ground. Enable is tied to ground so that the board is always on. Step/Dir will depend on the connector you are using coming from the stepper controller, but I'll post a small diagram a bit later. This is hooked into the extruder's stepper motor, so the motherboard actually controls the extrusion steps instead of sending that info over RS485 as MakerBot does. The extruder controller is now only used to control temperatures of the nozzle, bed, and a fan if used.

The thermocouple is attached using a Thermocouple Sensor board from MakerBot. I'm using the AD595C for higher precision, and have the thermocouple taped so that the tip rests in the thread near the end of the nozzle, not touching the HeatCore. The sensor board has three wires; Vcc, GND, and Sig. I hooked these up using a small 3-position connector that came with my Mendel electronics kit, and plugged them into the MakerBot extruder controller on A7.
The FiveD firmware has support for Thermistors, AD595 Thermocouples, and MAX6675 Thermocouples. All that's needed to do is edit configuration.h to uncomment the proper thermocouple #define line, make sure the others (such as USE_THERMISTOR)  are commented, and change the #define TEMP_PIN to 7. This will set up the unit to read the AD595 from analog pin 7, and it will work just as normal. Need to be careful not to short the thermocouple wires as they're bare, and they will cause spurious readings if they're shorted. A single wrap of Kapton around the leads just behind the welded tip should be sufficient.

As far as further configuration of the FiveD software for MakerBot, I'm still trying to get it to a working fashion.. The axis can be easily calibrated using the standard method prescribed by RepRap. I used the 100mm to start though, so it would take less time to calibrate. All movements are accurate right now. I'm working on getting the home offsets correct, and hopefully being able to use the build limits as well so it doesn't try to build off the bed.

I will post more photos and perhaps a video tonight when I head back up to the lab to work more on this. Until then, here are a couple I took with my phone last night. 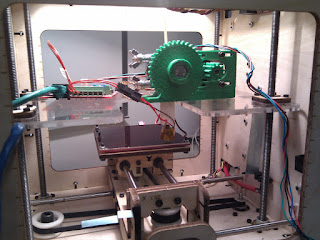 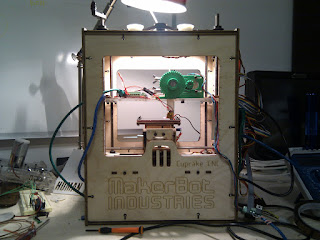 Well as you may know from reading previous posts, the MakerBot at FamiLAB decided to puke up and break it's extruder somewhat. I tried to fix it, it kept having issues driving the DC gearmotor, and it was basically nonstop unhappiness. So, I decided, with all these Mendel parts hanging around, why not incorporate some of them into the MakerBot to get it at least up and running so it can print us a Mendel?

Using the official MakerBot firmware with a geared stpper extruder is just way too much work and isn't really going to cut it. So, I decided to try and get RepRap's FiveD firmware up and running on the unit. It'll be good for a couple reasons.. One, I can do a few more things than I could with MakerBot, there's faster releases and better support for mods, since it was built to run a stepper extruder and has support for thermocouples out of the box. Two, I get more face time with it to really understand how that firmware and the apps work, so that when I finally get the Mendel built I'll already be pretty experienced in how to operate it and get things going.

So, I started off on that last night, getting the FiveD firmware set up with all the right pins, compiled, and uploaded to the MakerBot. I wired up a spare stepper motor controller to the extruder stepper and the I2C pins on the motherboard. I believe the H bridges in the extruder are kind of shot, so I'm doing this to get it running for now. I'm going to be making up a little mounting plate very shortly to get the Wade's geared extruder mounted up on the MakerBot Z platform. I may just clamp it to one side for now, just to test and get things moving, but I do want to get it set up properly with a bracket.

I calibrated all the axis and they seem to be moving proportionately now. Since the machine wasn't using endstops before, I had to set them up, test them and build some endstop triggers, which I made out of beer cans that happened to be laying around at FamiLAB. They seem to be working well, but I need a better way of attaching them as electrical tape just isn't cutting it. Other than that, auto-homing works properly now, all axis move, and are accurate.

The next step for hopefully tonight will be to get the extruder mounted up and start testing it.. I'm not so sure the speed settings are correct right now, but that's part of testing. I have the 0.5mm refsynderb nozzle in there and it's pretty much ready to go, just need to screw on the MakerGear HeatCore, attach my thermocouple and test that, and we should be ready to roll. I need to figure out how to get the heated build platform operational as well...

I'll be posting all this on the MakerBot wiki, as converting a MakerBot over to a geared extruder and FiveD has been an interesting task. I've been gathering some notes on the topic, and I'll be posting some pictures as well.
at 1:15 PM No comments:

Well I tried my hand at modifying some firmware and such, was a bit of a bust but here it goes:

Changed the v1.8 Heated Bed firmware to support the stepper extruder and also modified some code to use a thermocouple instead of a thermistor for the extruder temp sensing. Went up to FamiLAB and tried it out.. the thermocouple worked fine, but the stepper motor would not mobe. I'm not sure what the issue was.

The unfortunate thing is that there's no mention of how to wire up a Lin Engineering stepper to an extruder controller. They use Red/Blue/Green/Black wires, and I ohmed out the stepper looking for the two coils, which I found, and hooked up to the 1A/1B/2A/2B posts on the extruder controller. Tried to enable it and the H bridges got really hot, but no motor movement. The bridges stopped outputting power after that.

Looking in the Makerbot Operators group, someone mentioned that having a stepper connected that was less than 6 ohms might cause the H bridges to burn up; the Lin Engineering ones are about 1.8 ohm. However, they're also recommended on the RepRap website as steppers to use on the extruder controller. I'm a bit confused here, how are they normally used? There's a distinct lack of documentation as to what the resistance should be across the stepper terminals, so I'm of the assumption the H bridges were bad anyway and I didn't screw up there.

However, I did manage to screw up afterwards. Some folks in the Reprap channel on freenode were trying to help me troubleshoot the problem, when I managed to find out that the extruder controller has no reverse current protection in it. Hooked the 12v up backwards and blew the H bridges on my new board. Well damn.

So I'm ordering 6 new H bridges from Digi-Key, hopefully i can just replace them and that'll fix the boards, and perhaps try again to see if it was the bridges or if the stepper is the problem.

If anyone has some insight into this, it would be much appreciated. Been an ordeal just trying to get this working..
at 9:52 AM No comments:

Well, I haven't posted recently because I haven't spent much time actually building this thing, but here's a post to sum up what's been going on as of late. It's a bit long, but a lot is talked about here! MakerBots, Extruders, Thermocouples and firmware!