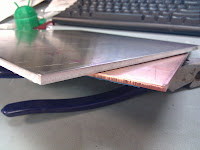 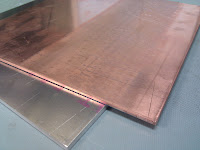 I can't wait to get the new heater glued in so I can see how well the copper plate reacts to the temps, and if the temp gradient is the same.
at 9:12 AM 3 comments:

Well, after much time not working on this thing, I have the time and drive to do it. So, got down to business.

The RepRap, when we last left it, was in a mostly working state. Aside from the temp controller. After chasing down the odd issues revolving around problems with it not able to hold temp correctly, I really got serious about looking for issues. I finally found a problem in the power signal coming from the supply. It appears that the cheap Chinese power supply we ordered was indeed cheap, but also noisy. As you can see in the following video, the oscilloscope shows huge spikes and changing noise on the line as the thermocouple turns on and off. I should mention that this reading is on the thermocouple itself, not on the output of the power supply, even. It was creating huge amounts of noise.


I had a 0-15VDC 40A capable power supply (yeah, big) hanging around, so I decided to give that a shot. Hooked it up and the noise was gone, and the temp controller is much more stable now. It still fluctuates a couple degrees between when the heater is on or off, but it's within the limits of the controller's abilities to hold it mostly stable, so I decided to just go ahead and proceed with getting it up and running.

To start, I got a copy of RepSnapper and compiled it, and gave it a test STL and after much playing around trying to get the machine actually talking, I finally got things moving, and made a test print. It's not much to look at, but it's a print. 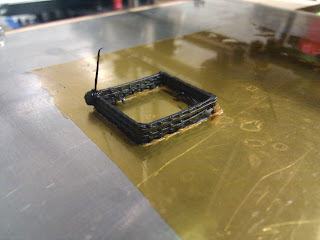 After this, I began working on Skeinforge to get it to make a decent gcode file. I had issues getting the plastic to stick to the cold kapton and aluminum, so since I already had a heater mounted to the aluminum, I set up my other temp controller and an SSR to control the 110v going to the bed heater. It heats up in about 20 seconds. Things started sticking MUCH better after that.

Following getting things to stick, I tried a few calibration squares, then a ring from Thingiverse to see how good it was working. The calibration cubes are coming out mostly squared up nicely, though I'm having some issues with flow rate. I think I'm not putting enough pressure on the filament in the extruder and I'm having issues here and there with it stripping out occasionally, usually due to the FTDI cable not being hooked up when the stepper controllers are powered on. If the enable line floats and so does the input, the steppers will drive all crazy until they're pulled in a certain direction by the motherboard. Here's a video of building one of the rings:


Last night I tried printing a few more rings as well as an object someone in the lab had tried to make (a mixing paddle from a bread machine) and it did a decent job, albeit with flow problems again. I printed a pair of tweezers as well. So far, so good. A few pieces of the machine aren't tightened up properly and they're falling off, but I'm keeping it together. I'm going to build  my own small control board and mount for the Omron controllers, and finish getting the wiring cleaned up. I'm looking at making one of the new sexy Wade's derivatives that popped up on Thingiverse recently:

It's got better accessibility to the hobbing as well as a better gear ratio and smaller styling. I'm excited to start printing stuff on this thing! Hopefully the blog will be going a bit faster now that we've got some activity!
at 10:31 AM No comments: