Well I usually head out to the RepRap forums daily and check out what's new on the site, get a feel for what people are doing and if there's any good deals like the geared extruder from earlier in the week.

I started reading up about extrusion heaters on a thread in the RepRap forums. It referenced Nophead's interesting heater design, utilizing an aluminum block with a nozzle machined into it. Unfortunately, I don't really have the equipment to machine myself some nice heaters, so I'm basically making due with what I do have.

So, I've been thinking a bit more about this, and I've come up with a couple ideas to try: Mainly, since I got heater barrel/nozzles already from refsnyderb, I'm looking into ways to use this nozzle instead of making another. The big thing that seems kind of fragile about the nozzle/heater on the normal RepRap is the fact that nichrome wire is used, being wrapped around the barrel. This seems to have some issues, mostly the element getting burned out which requires a complicated rebuild of the nozzle. 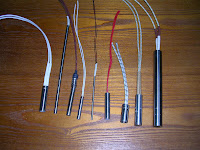 What I started thinking about after seeing how Nophead did his extruder, is that perhaps I could make something similar, only instead of aluminum, use copper, and try using a cartridge heater instead of the resistor. I know that he mentioned that the enamel resistors were cheaper, but the heaters seem to be more purpose-built and the heating they would be doing would be much closer to their spec, so perhaps heating and such would occur faster.

The idea I'm wanting to try is to either do a horizontal heater like Nophead did with the current nozzle I have, the cartridge heater mounted perpendicular to the nozzle direction, to minimize the amount of melted plastic that's sitting in the nozzle. This would be a bit larger, but it should still be able to perform all the usual tasks.  The other idea I had was to take a block of copper and cut kind of a notch out of it, but leave enough copper to the side of the barrel to contain a full 1" long cartridge heater, which would then be held parallel to the barrel. I'm thinking this might be the thing to do, and it would help me by providing good heat transfer through the copper, and at the same time, provide a small melting area near the end of the nozzle, as well as a narrow profile for the whole assembly. Most likely I will use some thermal compound or something similar to help thermal conduction between the heater and the barrel, and set a locknut above the heater to help keep it locked on the barrel.

Copper is fairly inexpensive right now, so I'll most likely get a block of that, along with a cartridge heater from McMaster as well as a couple washers that were somehow left off of the previous order. I've still got the nichrome wire on the way, so I can revert to the standard if this doesn't work out for me, but if it does, things should be pretty interesting. I'm looking into 110v solid state relays to control the cartridge heater, as they all run off of line voltage. The cartridge heaters are speced quite well; they are rated up to 1600F, which is much hotter than necessary, and the thing's whole purpose is to be shoved into a chunk of metal and get hot. This seems perfect. Here's a design I drew up in SketchUp to kind of visualize it. The hole in the top of the metal is for the cartridge heater to be installed vertically. I'd love to hear input if anyone watching knows of some pitfalls or has done this before, so if I'm headed for disaster I'd like to know!
at 4:16 PM