Well, I spent all night working on the RepRap (and making a banana cake. I loooove cake) and the outcome is this: 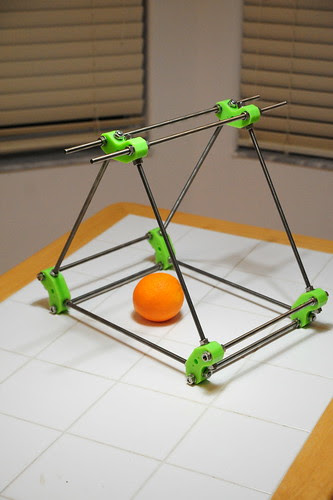 A frame! It's just a test fitting to see how things come together.. Well, while everything seems to go together right, and that's set at all the right spacing down to a 16th of an inch, there's just too little length on those C bars to feel comfortable with. I think the width is just a little wider with the washers and such.. either way I could give it a 3/4" of extra length to keep things happy; right now the bolts are holding on with only a couple threads. I'll probably just leave it for now, and then later on after it's working, cut a couple new sets. Unless I get really bored...

So tonight after I cut the other piece of studding for the second set of D1/D2 bars, I cut down the nice stainless rod for the bearings to ride on, and now have six pieces of that ready to go. 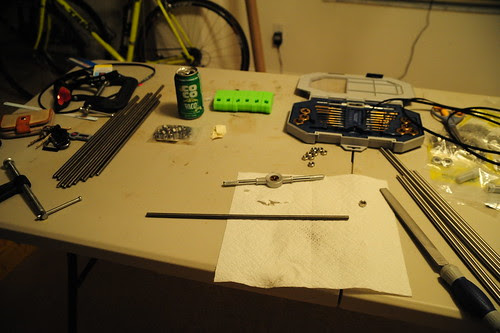 Next is getting a set of electronics while I try to work out places to get more RP parts for the machine. I'm also looking to order some Nichrome wire and start on building the extruder.. need to get some motors too.

I also stopped by FamiLAB the other night.. It's a cool little hackerspace in Orlando here that's got a bunch of really smart, fun people who frequent. I'm on the mailing list now, so I might be going to some more of their gatherings. One of the members there has a MakerBot, and he's expressed interest in meeting with myself and another person from the RepRap forum who has a Cupcake as well. Be cool to talk with these guys and actually see a printer printing!

Been also contemplating switching to a Bowden extruder a little after I get this thing running, since I could use a larger NEMA 34 motor to get extra torque with a direct drive method.. We'll see..
at 11:29 PM