Just wanted to throw a little bit up here about the parts that came in today..

I received my order in from SparkFun electronics earlier today, and since it had the requisite bits needed to build the thermocouple amps, I built that. 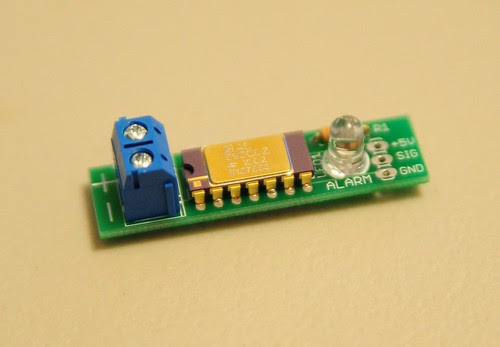 Here's the finished product, a couple 330ohm resistors from the kit of resistors I got, the AD595C, a random LED I had sitting around (the two amps have different LEDs!) and a terminal block to hold onto the thermocouple leads.
In staying with the article's information on how to make them a bit more accurate, I soldered the AD595C directly to the board, and used the more accurate variant.

I took the current bike computer project's Arduino and display, and repurposed it into a small temperature display. After a few little issues with the display needing small delays inserted here and there between commands to keep it from freaking out, I got it to display the temperature. 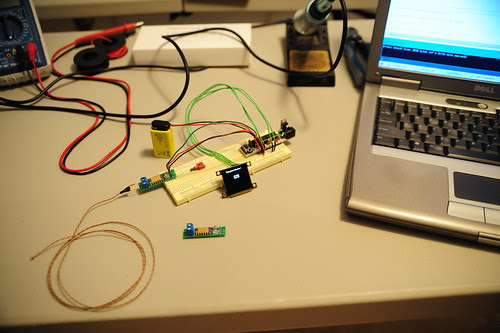 Here it is, showing a pleasant 69F inside the house. I also tested it using a heating element on the stove that my roommate had recently turned off. The probe was reading temps of 500F, so that's good. It had a very fast response and instantly read 32F when i set the probe on an ice cube, so it's calibrated well, and I'm getting very accurate readings.

I put my McMaster order in, so some copper bar stock and a cartridge heater are on the way, along with some missing washers from the first order. I noticed that Josh Updyke is now selling more parts that are milled. I've been happy with the first ones he sent, and with the prices he's quoting, it might be a good way to get the Mendel up and running faster without having to build so many RP parts.
at 12:20 AM